This is the forth day of KidzArts 2017 and today Peter meets Jesus on the Beach.

Fishing on the Sea of Galilee Again

Narrator:  One evening Peter and his friends went out fishing on the lake.

Peter and disciples enter and sit in boat.

Narrator:  The cool evening breeze filled the sail of his boat. Soon they were out in the middle of the lake. They threw their net out into the water.

Disciples throw net in the water.

Narrator:  Then they pulled the net in – but not even one fish!

Disciples pull net out of the water.

Narrator:  All night long, they threw the net out and pulled the net in.

Disciples throw net in the water, then pull it back in.

Disciples throw net in water then out a few more times.

Narrator:  But they caught nothing.

Narrator:  While Peter sat in the boat, he remembered a night similar to this one. He remembered that three years earlier, he was out on a lake fishing with his brother. And just like this night, they’d failed to catch even one fish. 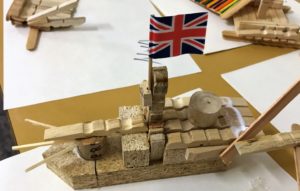 Narrator:  But then Jesus had come walking along the shore. Jesus had told them to throw their nets in – one more time. And as soon as their nets hit the water, fish came from everywhere.   What a catch!

Narrator:  Peter knew that day that the man standing in front of him was no ordinary
man. So he left everything and followed Jesus.

Narrator:  But now, three years later, everything had changed. Peter had failed Jesus. He’d said not once, not twice, but three times that he never knew Jesus. Peter had abandoned Jesus.

Narrator:  Then Jesus had died.

Narrator:  Peter was too late. He never got to say how sorry he was. While Peter was remembering this, the sun began to make its way up over the hills. Peter and his friends looked down at their nets. Not one fish had been caught.

Narrator:  As they made their way back to the shore, they saw a man walking beside the lake.
Enter Jesus. The man called out, “Friends, caught any fish?” 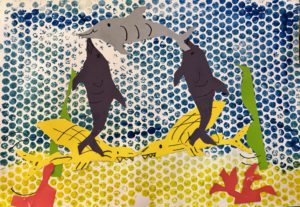 Narrator:  Peter called back, “No, not even one.”

Peter: No, not even one.

Narrator:  The man then said “Throw your net on the right side of the boat. Then
you’ll catch fish.”

Jesus: Throw your net on the right side of the boat. Then you’ll catch fish. Peter couldn’t tell in the early morning light who was speaking to them. He looked at his friends.

Narrator:  One more toss of the nets wouldn’t hurt. So they threw their nets one last time into the water.

Disciples throw their nets into the water.

Narrator:  And as soon as their nets hit the water, fish came from everywhere. So many fish that, even though they were strong men, they could not drag the net into the boat. They looked down at the net, teeming with fish.

Narrator:  Disciples look down at nets.  Then they knew who the man was.

Narrator:  It was Jesus!

Peter meets Jesus on the Beach

Narrator:  Peter let go of the nets, jumped out of the boat and swam to the shore.

Narrator:  He left the others to drag the net full of fish behind the boat.

Other disciples drag HEAVY nets in behind the boat.

Narrator:  By the time they reached the shore, Jesus had a fire going and was cooking fish and bread for breakfast.

Narrator:  They all sat down in silence to eat. Jesus had died but was now alive. The risen Lord Jesus was eating breakfast with them. Jesus had come to life again, just as he said he would. After breakfast, Jesus looked at Peter and asked him, “Peter, do you love me?”

Narrator:  Peter replied, “Lord you know that I love you.”

Peter: Lord you know that I love you.

Narrator:  Jesus asked Peter a 2nd time, “Peter, do you love me?”

Narrator:  Peter again replied, “Lord you know that I love you.”

Peter: Lord you know that I love you.

Narrator:  Jesus asked Peter a 3rd time, “Peter, do you love me?”

Narrator:  Peter was hurt because Jesus had asked him three times if he loved him.

Narrator:  Peter said, “Lord you know everything. You know that I love you.”

Peter: Lord you know everything. You know that I love you.

Narrator:  But it was not that long ago Peter had said not once, not twice, but three times that he didn’t even know Jesus. Peter remembered how he had failed Jesus.

Narrator:  Jesus spoke to Peter because he knew that he was feeling bad about denying him. Jesus knew that Peter had repented and that he loved him very much. So three times Jesus asked Peter if he loved him. And three times Peter answered, “Yes.” And even though he didn’t deserve it, Jesus forgave Peter.

Narrator:  Then Jesus turned to Peter and asked him for a second time to come and follow him. And that’s what Peter did.

Peter stands next to Jesus

Narrator:  Peter spent the rest of his life telling everyone about Jesus – God’s promised King who came to save people who failed.

Narrator:  Have you asked Jesus to forgive you? Forgive you for your sin, for nor following Him and loving Him as you should. Because Jesus is the only one who can. Jesus can forgive you because he died to take the punishment for you.

Narrator:  In the end Peter got it right. He asked Jesus to forgive him. He let Jesus take his punishment.

Narrator:  Have you, like Peter, asked Jesus to forgive you?