This is the third day of KidzArts 2017 and today the drama is about Peter and the cross.

Jesus tells Peter “You will say you don’t know me”

Narrator:  Jesus ate his last meal with his disciples. He gave them bread and wine to remember him. They sang a song then went outside.

Enter Jesus and Peter and other disciples.

Narrator: Jesus turned to Peter and said, “Peter, before the rooster crows tomorrow morning you will say three times that you don’t know me.”

Jesus:  Peter, before the rooster crows tomorrow morning you will say three times that you don’t know me.

Narrator: Peter protested “No, I will never deny knowing you”.

Peter: No, I will never deny knowing you.

Narrator: That night soldiers came. They arrested Jesus and took him away.

Enter Soldiers who arrest Jesus and take him to other side of stage.

Narrator:  The disciples ran away.

Disciples except for Peter run offstage.

Peter walks cautiously in the direction of Jesus but not right up to him. He looks very scared.

Peter and denies he knows Jesus

Narrator:  Peter was scared so he stayed a long way back.

Peter nervously takes a couple of steps back.

Peter warms his hands by the fire. Enter a servant girl who warms her hands by the fire.

Narrator: She looked closely at Peter.

Narrator:  She said, “Are you a follower of Jesus?”

Servant girl: Are you a follower of Jesus?

Narrator: But Peter shook his head and said, “I am not.”

Peter: I am not

Narrator: A little while later a man came to the fire.  The man looked at Peter. Man looks at Peter. Peter tries to hide his face.

Narrator: The man said, “You are one of Jesus’ followers!”

Man: You are one of Jesus’ followers!

Man shakes his head and exits. 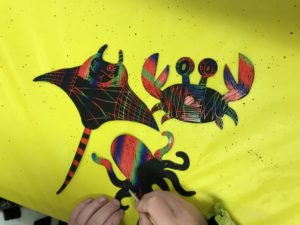 Narrator:  About an hour later another man came to the fire. He too looked at Peter.

Narrator:  The man said, “Didn’t I see you with Jesus in the garden?”

Man: Didn’t I see you with Jesus in the garden?

Narrator: And for a third time Peter said, “I don’t even know who you are speaking about!”

Peter: “I don’t even know who you are speaking about!”

Narrator:  Then Peter remembered what Jesus had said. He remembered Jesus had said “Peter, before the rooster crows tomorrow morning, you will say three times that you don’t know me.” And Peter wept.

Peter and the Cross

Narrator: Jesus had been arrested. Peter didn’t know what was going on. He didn’t want to be arrested like Jesus. He was scared. Big strong Peter was now afraid. And when Peter remembered what Jesus had said, he turned his head away and cried. He knew he had let Jesus down.

Narrator: Sometimes it’s hard to say we love Jesus. We might feel scared about what our friends or family will think of us. Even big brave Peter, the strong fisherman, who was one of Jesus’ best friends when He was on earth, and who only a few hours earlier had picked up a sword to defend Jesus (and cut off a servant’s ear): even Peter felt scared and denied that he knew Jesus.

Narrator: But if we love Jesus, we should always say that we love Him. We can pray to God and ask Him to help us do that when we are scared. We should never be ashamed to say we love Jesus.