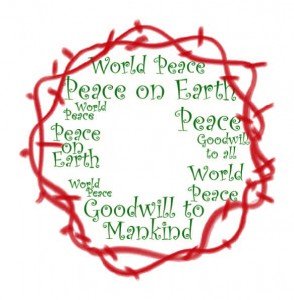 As we celebrate Christmas it may come as a shock to many, why people originally celebrated. Society over the years has reinvented Jesus in their own image and we’ve seen everything from the long haired hippy, to a jewish Ghandhi. Movies depict him in soft focus, all the characters around him are paper thin, and he’s a pawn for the political forces of the day.

No one seems to twig that 1st century Israel was just as explosive an environment as it is today, if not more so, and that there was something about Jesus that made him crucifiable. Even church goers can sing their carols oblivious to the explosive content of the words, and our sentimentality clouds the real reason for celebration.

To discover the reason they originally celebrated Christmas, you just need to look at the songs song by the original participants. Luke records Elizabeth, Mary, Simeon, Zechariah, Anna and the angels all rejoicing in the birth of this world changing child. And the reasons they give are overtly political. They speak of peace on earth, not as some left wing pipe dream, but because God has revealed himself in human form as promised, and that as we come to terms with this kingdom personally, the problems of our world fall into perspective. It’s a threat to personal autonomy that might get someone crucified. But if that person is God, he has every right to make it.

As we celebrate this Christmas may God grant that we grasp a little of what it means to live in his kingdom, under his rule and blessing. It is ‘good news of great joy’ that God should come to the darkness of this world willing to forgive, rescue and keep all his promises to those who trust in him.